This fascinating article largely speaks for itself: “An Intellectual History of the Sandbox.” While I’ve long been aware of the creative potential of sandboxes and the adoption of the term for individual and collaborative workspaces (what we now have to call incubators), I’m not sure I’d have given much credence to their intellectual traditions or characteristics. I’d have been remiss:

In 1885, a group of female philanthropists decided that the immigrant children of Boston’s North End needed somewhere other than the increasingly crowded and dangerous streets to play. They paid for a pile of sand to be poured into the yard of a chapel on Parmenter Street at the beginning of summer … The idea came from Germany, where such “sand gardens” were introduced in Berlin’s public parks in 1850 … [children] solved their own problems of administration, carpentry, industrialization, sewage, and monetization.

What strikes me, though, isn’t the history of the sandbox. Rather, it’s the direction in which games of the imagination and the practice of creativity have evolved, as well as our seemingly increasing reluctance to get our hands dirty — literally, figuratively, and creatively.

Go Ahead, Back Up

In the 168 years between 1850 and now, we seem to have come so far and advanced so little. From the innocent combination of imagination and grains of sand, from the trial, error, and acceptance of plastic pails and shovels to the unforgiving precision of AutoCAD, from the shifting sands of impermanence to the rigidity of judgment, we’ve refined our tools and gone to work for them. 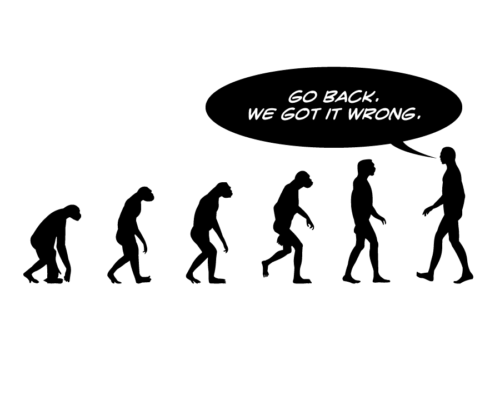 I don’t know what we should do first: simplify or forgive ourselves for the mistakes that will be made — that have to be made — in any creative process. (It’s no accident that the civilized appropriation of rubber preceded the discovery of graphite by 39 years or the first manufactured pencil by 137 years. We used to allow for our mistakes and found it useful to be able to erase them*.) But I do know we’ve lost something profoundly simple and forgiving in the way we play and work, in the valuable relationship between play and work.

Maybe the remedy is as simple as returning to our willingness to get our hands dirty, to make mistakes and accept them, to erase or correct them, and to re-invest ourselves in the playfulness by which the best work is and has always been done.

Let’s try. I’ll meet you in the sandbox.

*In 1525, the Italian historian, Padre d’Anghieria, reported seeing Mexican tribespeople playing with elastic balls. Graphite was discovered in Borrowdale, England, in 1564 and inserted into hollowed-out wooden sticks, precipitating the first mass-produced pencils in 1662 in Nuremberg, Germany. The rest, as they say ….

Be Careful What You Wish For
Scroll to top